Anatomy of a Fake Friend Request

I received a friend request today, one that I pretty quickly determined was fake. Aside from the fact that I’d never heard of the dude, here’s what tipped me off: this is Captain Faker’s Facebook account. My, he certainly looks legit! And I’m sure what whoever he stole these photos from is legit.

He claims to be a widower from my state. 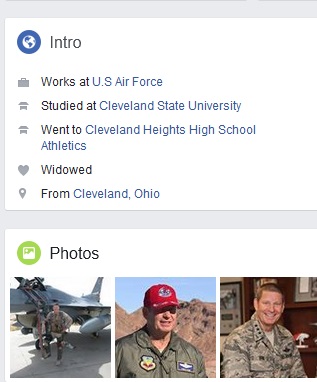 Interestingly enough, all the photos of this guy were added at the same time, eight hours ago. I did a little reverse image search on this fellow. (This is a great feature and one you should check out. Google it.) This is actually a photo of General Robin Rand of the United States Air Force.

General Rand is not a lonely widower in Cleveland. He seems to be a very busy guy, according to his Airforce biography. I noticed that all of “Nelson Rand’s” friends seem to be middle-aged ladies.

Something similar happened to a friend last week. (She mistakenly thought the friend request was a relative because he was friends with her aunt.) The first thing her creepy “friend” did was start to hit on her. Now, she got rid of him ASAP. If she hadn’t, the request for money would have come sooner or later.

I have reported Captain Fakey McFakerson to Facebook, but there are a thousand scammers just like this guy (or gal—it could be anyone) waiting in the wings.

It’s never a good idea to accept friend requests from people you don’t know. If you think you might know someone, do a little investigating. Just because you have mutual friends doesn’t mean they know the person. Message your friends to ask how they know this person, or message the person and ask how they know you. If they claim it’s from school or work, ask some questions to confirm it. Even if you wouldn’t hand money or private info over to a stranger, this person could use their Facebook friend status with you to trick your friends into accepting a request.